Bats are the second-most diverse group on mammals on the planet, with over 1400 different species! In recent decades, we have discovered that bats host a remarkable diversity of microbes, such as viruses, bacteria, and protozoa. In some cases, some of these microbes can "spillover" and cause disease in humans. I use field work, lab work, and modeling to study the ecology of pathogens and disease in bats.

Ebola virus disease has caused devastating outbreaks. Ebola viruses have been detected in bats, although the true reservoir is still unknown. Due to an increasing number of outbreaks in recent years, some have hypothesized that human disturbance, land-use change, or increased human population density might cause outbreaks. The potential of bat distributions has been largely unexplored.
​You can see what we found below:

To better understand why Ebola virus disease outbreaks occur where they do, we used two types of ecological models to compare the diversity of all bats species, the diversity of each family of bats, human population density, road density, and the amount of crops and pastures at locations where Ebola viruses have spilled over to random locations in sub-Saharan Africa where Ebola virus has not spilled over. You can see the distribution of these variables below: 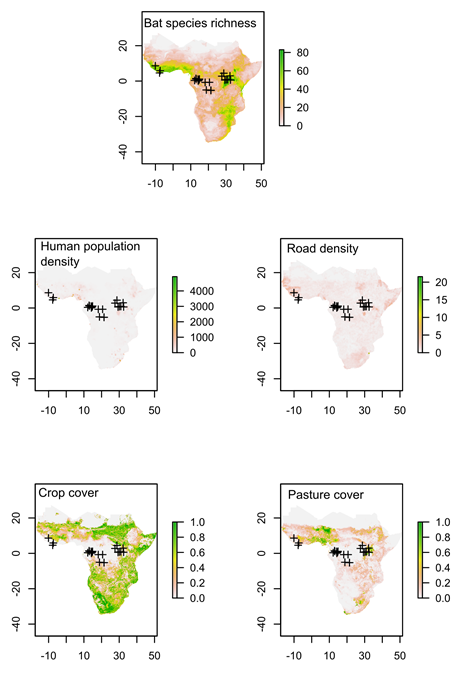 According to both models, we saw that Ebola virus disease was associated with areas of high bat diversity and in particular areas with high diversity of Nycterid bats:

Here you can compare the distribution of species richness for all bat species and species belonging to the Nycterid family:

We also found that Ebola disease spillover occurs where pasture cover is low. We did not see any effect of human population density, road density, or crop cover. 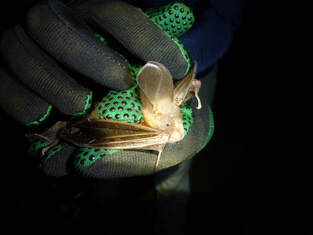 But don't forget - bats are essential parts of their ecosystems and provide important ecosystem services that benefit people - such as controlling insect populations, dispersing seeds, or pollinating plants.
There is no reason to be afraid of bats! Please respect bats as wild animals and not approach or touch them.
Find Out More!

Leishmania and Leishmaniasis in Bats

Leishmaniasis is a disease caused by parasites in the genus Leishmania, which are transmitted to people via sandflies that may cause organ failure or disfiguring damage to skin and cartilage.
While in Brazil as a Fulbright grantee at the Federal University of Mato Grosso do Sul, we caught bats that had lesions and suspected infection with Leishmania​:
We tested a total of five bats for Leishmania using using PCR and PCR-RFLP.
We detected Leishmania (Viannia) braziliensis in two bats - one Glossophoga soricina with lesions and positive liver tissue (possibly indicating visceral leishmaniasis) and Molossus molossus showing no lesions or symptoms.
Find Out More
Powered by